Clubhouse Statistics 2023: How Many People Use Clubhouse? 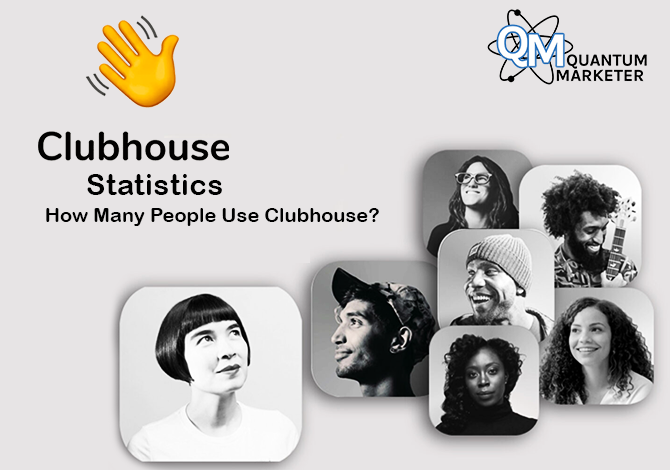 So, you may have heard of this trending thing called, Clubhouse. But what really is Clubhouse, and why is it surging in popularity at the moment? It’s been getting quite a bit of media attention.

Since we’re always keeping up with social media networks and their trends, we’ve decided to take a closer look at Clubhouse to see what it offers users and what some of its basic statistics are.

With new technology and ideas coming out on a daily basis, it’s not too late for a new social media network to swoop in and take Instagram or Facebook by storm. After all, people love to be a part of the crowd.

Let’s take a look at the fast-growing application and find out a couple important statistics to help us understand its ins and outs.

Clubhouse Statistics: What is Clubhouse?

Clubhouse was launched sometime in April of 2020, with only a few thousand users by summer, mostly people from Silicon Valley in big tech and venture capital, all of whom wanted to connect with each other during the windstorm of COVID-19.

The main premise of the Clubhouse app is an audio-only platform that provides users with chat rooms to discuss topics of their choice. There are two participants in the chat rooms: those that are listening, and those that are speaking.

Chat rooms can be created by two or more users and you can also find chat rooms categorized by topic.

All in the chat can see everyone in the chat room at one time. A moderator is in charge of these discussions and can allow someone to participate or even kick people out if they aren’t adhering to the standards.

The main draw to Clubhouse is its exclusivity: you have to be invited by someone already on the platform in order to join.

Quite a bit of criticism has surfaced claiming that Clubhouse has very male-dominated energy, but it has still managed to gain traction and popularity. There are plenty of women on the platform as well.

Not only that, you never know who you’ll bump into on the platform, with a somewhat “small world” type feeling.

Clubhouse has already been blocked by China, and it will be interesting to see if any other countries with more restrictive governments decide to follow suit.

Clubhouse is only available on iOS, and when a person is invited to join, they receive invitations that they are able to hand out. If you know someone who is on the platform, you may have an in.

If not, you can probably buy your way in as these invitations have surfaced for sale on eBay. It just goes to show that people will pay to be a part of something, no matter the cost. That’s the ultimate argument for social proof.

In any case, it might be worth it to wait— the Clubhouse website says they are “still opening up” which indicates that they are perhaps working on expanding the platform in user base and functionality.

Clubhouse Statistics: How Many People Use Clubhouse?

Here is a breakdown of the number of Clubhouse users over time:

So, in the short window of 2 months between December 2020 and February 2021, Clubhouse had 10x the number of registered users.

This shows that the popularity is definitely gaining traction, and that’s just on iOS, as it isn’t available for Android (yet, if at all).

How many times has the app been downloaded? Well, millions. It’s quite fascinating to take a look at these statistics that have been provided by App Annie.

As we can see above, in December there were already 600k registered users, but Clubhouse was still not one of the top 30 downloaded social media apps in the US at the beginning of December.

By december 23rd, it had already spiked to the 3rd most popular iOS social media app.

Here are the details:

Also in December, Clubhouse began testing a Creator Pilot Program with over 40 influencers on Clubhouse. If you are an influencer, it might be worth looking into and getting on the app ASAP.

It’s said that the influencers that are a part of this program get to have weekly meetings with the founders as well as access to exclusive features and tools on the app that others won’t have access to.

The first influencer on Clubhouse is Sheel Mohnot, the founder of Better Tomorrow Ventures; he frequently participates in the “back of the buss” after-hours Clubhouse room discussions.

He has been a participant on Zoom Bachelorette as well as featured in music videos from Justin Bieber to Ariana Grande.

Not too shabby, eh?

If you’re wondering about global performance, we’re not done yet. Aside from US presence and popularity, the app has managed to gain traction abroad, with download rankings sizing up as follows:

Seems that things are looking promising on a global scale for Clubhouse as well.

Now that we’ve taken a look at where and how popular the Clubhouse app is, let’s check out some of the most popular clubs that people have been taking part in.

These are the top 5 Clubhouse clubs:

Some other popular clubs include Creative Executive officers with 112k members and The Hustler Club with 101k members.

As you can see, most of them are related to business and productivity, and even Instagram secrets.

As we know, there are quite a few big names on Clubhouse, but who has the highest number of followers? Here’s a quick breakdown of the 10 Clubhouse accounts with the most followers:

For an invite-only app, those numbers are pretty substantial. Maybe it is a small world, after all.

Clubhouse is coming up on it’s one-year release date mark, and it’s managed to generate a huge amount of investment interest from over 180 investors on the app.

The valuation for the company has already hit one billion dollars.

As of January 2021, however, it’s already shot up to 1 billion USD. It will be interesting to see what the future of Clubhouse holds.

They previously built the social app Highlight, and when they came together in April of 2020 the idea of an audio-based social media platform was created.

Clubhouse currently employs 9 people, so watching the expansion of the company will be something likely to occur in the near future.

So, Who’s Really On Clubhouse?

As we know, this was said to be a rather exclusive platform and in only a few months celebrities and household names were already popping up on the app.

These are some of the people that have been seen:

And many more. That’s quite a list for an app that isn’t even a year old yet, and this is just a glimpse at the complete list.

The Future of Clubhouse

It can be concluded that Clubhouse has had a tremendous amount of success in the time approaching their 1-year launch anniversary; what do you think the future holds for Clubhouse?

Will it remain an exclusive platform? Will it go public or be bought out? Will it surpass Instagram or Facebook? Only time will tell; let us know what you think in the comments!