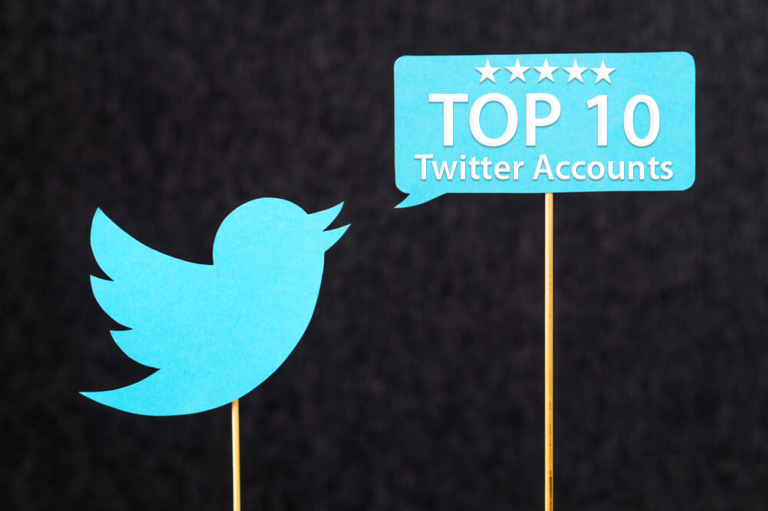 As we farewell another year and brace ourselves for the next one, there is even more opportunity online for new faces to grace the social media channels that we follow.

With 2020 being a whole new ball game, it’s a pretty good time to look back on what 2019 has been like, and check out who has dominated the Twittersphere.

Remember, anything could happen in 2020, so before we forget who was on top in 2019, let’s check out the top 10 Twitter accounts.

We all know who Katy Perry is, right? She’s that super famous pop singer who is currently one of the judges for American Idol. She likes to keep her tweets pretty brand-related these days and promotes everything from American Idol – of course – to clothing lines.

Her music style if pop – upbeat, happy, and a bit quirky at times, too. Of course, she’s also known for having quite an original unique fashion sense, and she quite likes to make the connection between food and clothing a lot of the time. Despite her strange outfits and appearances, the media still considers her to be a bit of a sex symbol.

Like we mentioned, Katy Perry tends to stick to brand tweets most of the time. They’re either current collaborations that she’s got with brands, or they’re updates on what is next for her. She makes sure to include something witty or funny with each tweet, so we think that it’s a pretty interesting, fun page to follow.

Just like Katy Perry, Obama needs no introduction. The 44th U.S. President was the first African American to be elected for the job, and he has, in fact, been voted the most respected man for the past 11 years.

He first started out as an attorney, and then rose to the role of a democratic senator. He is well known for attempting social reform on various topics, and is perhaps most famous for his efforts with the Affordable Care Act, to help people with healthcare by reforming insurance markets.

As you may have already guessed, a lot of what Obama tweets about is related to politics. He uses his platform to raise awareness of what’s going on and often shares inspirational and motivational posts, too. He is also funny at times, as well, in an attempt to mix it up from time to time.

Just like Katy Perry and Obama, there’s a good chance that you’ve heard of the Biebs before. You may also have heard and perhaps listen to his music still, too. While he tends to stick to pop as his main genre, recently, he has branched out into a bit of R&B, as well as spiritual and religious, too, as he is a Christian.

When he first debuted in 2009, it didn’t take long for his music to garner mainstream attention, which catapulted him into immense fame. Interestingly, he is a pretty polarizing figure, with people either loving him or hating him.

One of his most popular songs on YouTube has a whopping 2 billion views, but it also has one of the biggest amounts of dislikes as well. While his life was scrutinized a lot more when he was younger, it has calmed down a bit now since he got married to Hailey Baldwin.

He keeps his tweets to personal opinions, and of course, brand endorsements. He also likes to share things like his favorite movies or songs with his followers, too.

Rihanna is a popular pop artist, who could also be classified as R&B, too. She is largely known for being a sex symbol in the industry, and is also well known for her sense of style, too.

Interestingly, she’s also a diplomat, and regularly represents her birth country, Barbados. She has also invested a lot of her time and money into several charities, many of which are related to fighting terminal diseases. As a result of all her efforts, she is a well-liked and well-respected figure in the public eye.

As you can imagine, then, Rihannas Twitter is a nice mix of brand promotions and politics. She likes to touch on the things that are important to her, and the change that she is hoping to see in the world.

We think that her tweets and overall Twitter are pretty original and exciting, so make sure to go and check her out if you’re a fan.

Taylor Swift has arguably one of the biggest reputations in the pop music industry. She used to play country music but switched this up in 2012 to become more mainstream, and it looks like it has paid off enormously. She also writes a lot of her music, which can’t be said for everyone in the pop industry.

She is pretty popular when it comes to celebrity news, and there have been many rumors that have circulated about her personal life. She responds to a lot of this through the music that she writes, and she is often teaming up with different charities and fundraisers.

While Taylor Swift is obviously pretty outspoken about things like politics, what’s pretty interesting is that she doesn’t generally use Twitter to express this. Most of her tweets are related to brand promotions, which she twists with little witty sayings and jokes that make them a lot more palatable. She mixes her immense fame with humility, which makes a lot of her tweets pretty endearing. As you can imagine, she’s pretty popular as a result.

Gaga is another pop artist who has recently branched out into the acting field as well. Interestingly, she started out wanting to be an actress, but her music career quickly took over. She likes to experiment with new music genres, and as a result, has released many different albums that couldn’t all be put into the same category.

Her musical style is as sporadic as her fashion sense, which she is arguably known better for. She has a foundation called Born This Way that helps youth communities, and she has a pretty unique and interesting approach to her social media pages. She divides her tweets between brand promotions and super personal.

This means that a lot of the time, she comes across as pretty relatable and down to earth. This is not the kind of celebrity Twitter page that you’ll see every day, which is probably why it’s so popular.

While Cristiano Ronaldo may not be as famous in the U.S. as other celebrities on this list, in Portugal, he is more famous than anyone in the world. This successful football player has dominated the internet for a long time now, with popular pages on other social media channels like Instagram as well.

He is both aggressive and flashy when it comes to the style of his play. This means that he is pretty fun to watch, and his dedication to the sport has also earned him a lot of fan points over the years. As you can imagine, he has also had his fair share of scandals throughout his career, too, including things like tax evasion.

The vast majority of his tweets are related directly to the brands that he partners with. Sometimes, though, he will post photos of him and his family having a good time together. If you go over to Facebook, you’ll see that he is even more popular.

Interestingly most of his posts are also written in Portuguese, which is, of course, his first language. As a result, most of his engagement comes from overseas. For this reason, he tends to post photos that don’t even have captions – just emojis.

If you know anything about Ellen at all, you know that she will use her Twitter platform for fun, and a great chance to interact with and give back to her fans. You may know her for being an actress, comedian, and TV host.

She has been in the entertainment business since the 1980s, and while her humor is often on the sarcastic side, she has still managed to amass a huge following, both online and in real life.

Being a lesbian, Ellen is considered an icon in the gay community. She’s also a vegan and a strong supporter of animal rights. Again, as you can expect, most of her tweets are funny. However, a lot of them are also associated with brand promotions, as well as updates on her talk show, as well as her brand new game show.

Sometimes, it can be hard to tell the difference between her brand voice and her real one.

Ironically, one of the most popular Twitter pages belongs to another social media channel altogether – YouTube. YouTube first began in 2005 and was founded by employees that had recently left PayPal. They originally decided to do it as a dating service, where users could share videos of themselves as a part of the signing up process.

However, as you know, this evolved into something entirely different. People immediately began to share YouTube videos to make them go viral, and the rest is history.

Fast forward to today, and YouTube is one of the most popular video-sharing platforms on the internet. It has survived the last fifteen years of the internet and has outlasted some of its top competitors, like Vimeo.

There are three different types of tweets that YouTube regularly puts out – notices, fun posts, and video showcases. As you can imagine, their aim is to be light-hearted and upbeat.

You may know him for some of the biggest hits in pop in the 2000s, but ever since then, Justin Timberlake has worked hard to keep his position as one of the most successful male pop artists of all time. He started out by being a part of the boy band NYSNC, before branching out on his own and doing better than he could have imagined.

He tends to sing about topics related to romance, sex, and love. He leads the way in terms of both image and fashion and is often described as looking ‘effortlessly’ cool.

He also has a successful movie career, too, and has been in many different films over the years. You may be surprised to learn that his Twitter account is mostly made up of funny tweets. He likes to joke around and doesn’t take his social media presence too seriously.

Even when he is partnering with brands and promoting their product, he likes to throw in a joke or two. His good sense of humor makes his Twitter page a fun place to be.

As you can see, there are many different types of celebrities with massive amounts of Twitter followers that dominate the Twittersphere right now – but this could all change. While a lot of them are in the pop industry, some come from sports, while others from TV.