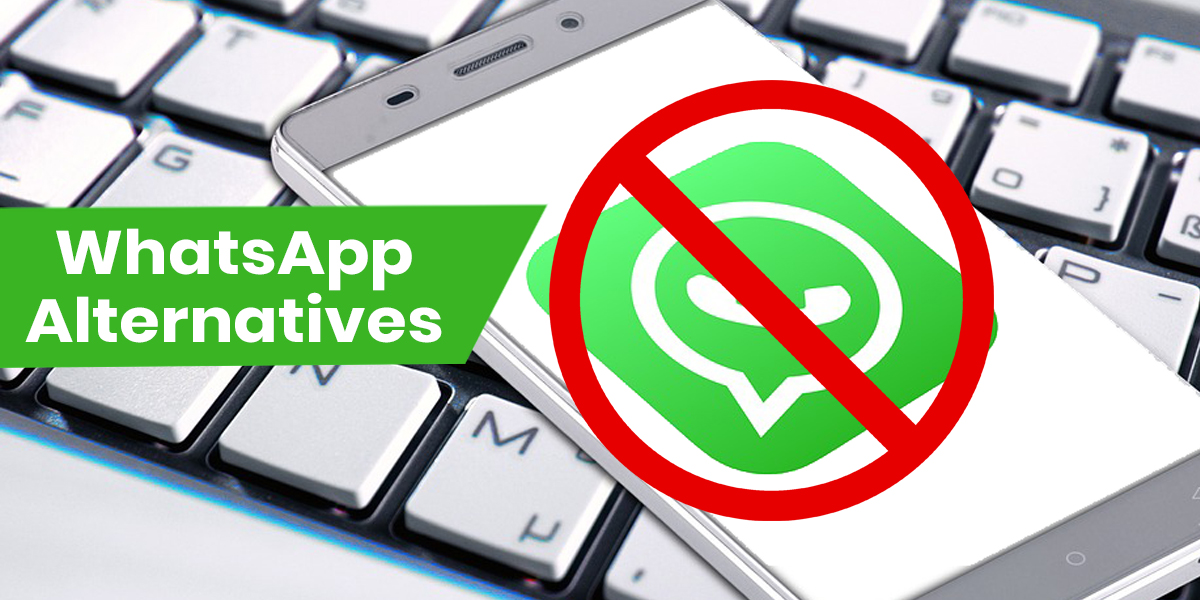 When Facebook acquired WhatsApp, it didn’t take long for it to do what it does best – violate people’s privacy.

If you’ve been put off lately by the actions of Facebook and think that you deserve better – which you do – we recommend putting that phone down and turning off WhatsApp forever.

You need an alternative, though – something that’s going to do the same job, but is going to be a lot better at respecting your privacy.

Let’s check out our 5 WhatsApp alternatives that actually respect your privacy. 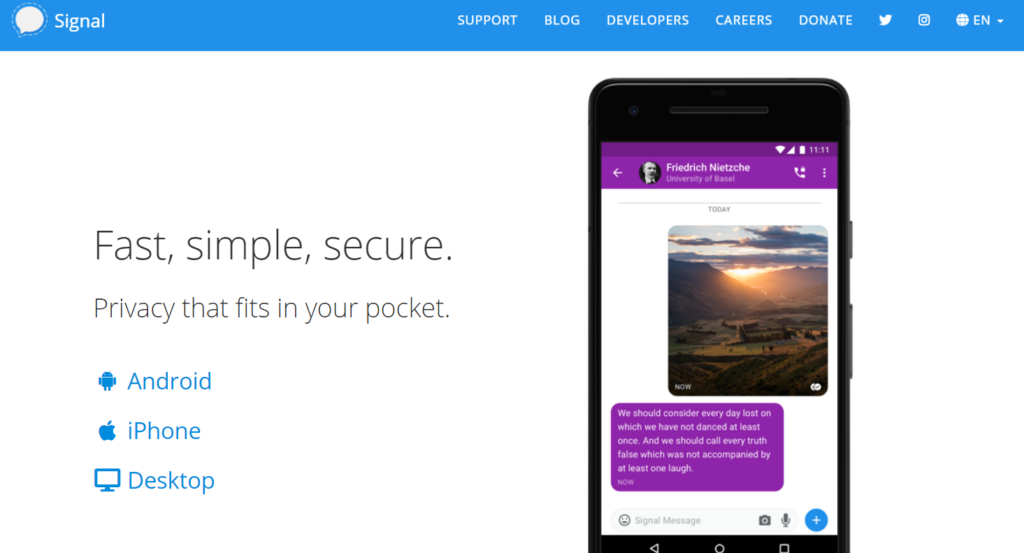 One of the first things that make Signal a popular alternative to WhatsApp is that it’s free. It’s also incredibly simple to set up and get messaging on, and it even lets you video and voice calls, too. That’s all of your WhatsApp features covered straight away.

Signal is also great if you’re someone who thinks they’re going to use the app on both their smartphone and their desktop. Every message that you send and receive is encrypted, which means that they stay between you and the person you’re messaging. Their open-source encryption allows experts to test out the software from time to time, making sure that there are no bugs.

What’s more, with Signal, you can even get your messages to go away forever by setting up automatic deletion after a certain time. This is a further level of privacy we’re sure you’ll appreciate. While Signal doesn’t have animated emojis yet, they’re easy to import from elsewhere. 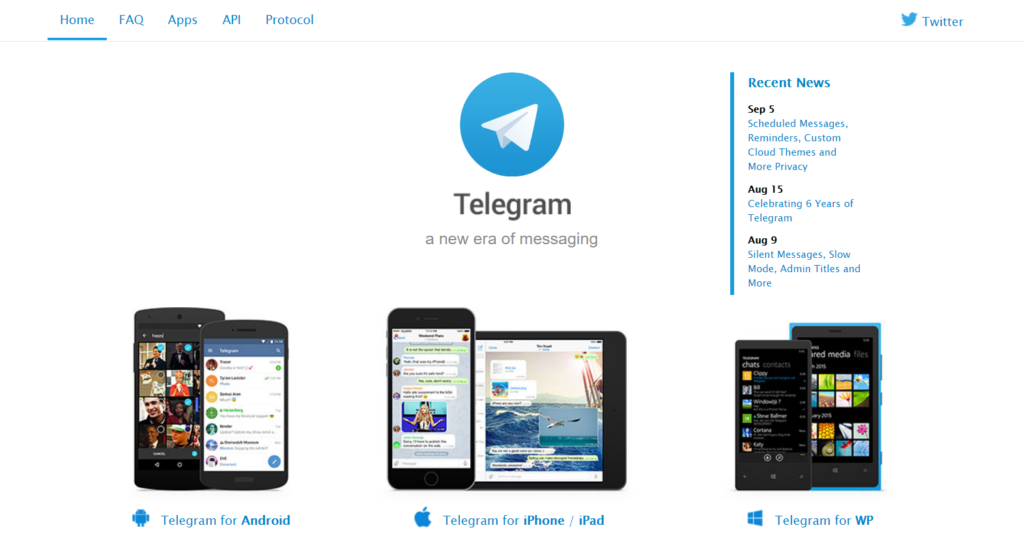 Telegram is a pretty popular alternative to WhatsApp – so much so that it now boasts as many as 550 million active users.

The best part of this cloud app is that you can use it on many different platforms, and it even comes with encryption on both ends when you’re making a phone call.

Unlike WhatsApp, you don’t have to be wondering if someone else is listening to your conversation.

Something important to remember about Telegram is that you need to turn encryption for messaging on yourself if you want to keep your messages private and secure.

This open-source software comes with a user-friendly platform, and because it’s based on the cloud, it can be taken anywhere you are.

Threema, unlike WhatsApp, can offer its clients complete and utter privacy.

This means that things like your contacts, as well as any group information you have, will just be stored on your phone – not through the app itself.

What’s more, they delete messages once they’re delivered. You can even get in touch with your favorite people by using a unique Threema I.D., instead of sharing your phone number.

Threema, just like Telegram, comes with encryption on both ends for texts, shared files, group chats, and voice calls. This means that the message you send to someone can only be read by them, nobody else.

Another advantage of an app like Threema is that you can use it in your browser, too. It even has some features that you won’t be able to find through WhatsApp, including poll creation and being able to leave feedback on single messages. The best part of this entire company?

They’re right out of Switzerland, which has some of the strictest privacy laws you’ll come across.

Speaking on Switzerland, here is another WhatsApp alternative that is making the most of those strict European privacy laws. Wire comes with end to end encryption and has a variety of different features available, depending on what package you want. From business to personal, there is a lot on offer with a company like Wire.

You can access Wire on whatever platform you prefer, and sync up eight different devices to share information on. You can also change the font of messages and create lists. With times messages and secured chats, it’s no wonder that this European WhatsApp alternative is quickly making a name for itself.

As well as end to end encryption for your messaging activity, Riot.IM also offers things like a unique I.D. that you can use instead of a phone number so that you can stay anonymous if you wish. This WhatsApp alternative can also let you interact with the software, making it a lot more user-friendly.

This is one of the biggest reasons why Riot.IM is typically more suited to developers, rather than larger corporate groups. We love their desktop interface, and you can even access up to seven languages to use with the app.
Just remember that, like Telegram, you’ll need to turn encryption on if you prefer to do things this way.

What’s the Deal with Fake News?

You may hear people complaining about fake news a lot, but you may still be in the dark about what this actually means. Fake news is news from a media outlet that is either exaggerated or erroneous, misleading viewers to believe that it is true for the sake of some higher power.

Facebook has been guilty of not only spreading, but condoning the use of fake news for years now, and even got caught out for misleading its users over the 2016 election in the states. Because WhatsApp is owned by Facebook, you can connect the dots and imagine that they’re not to be trusted around this topic, either.

So, can two social media monopolies truly stay mutually exclusive? The short answer is no. Facebook attempted to give it a go when they first bought WhatsApp a few years ago and even promised the UN that they would keep information from both platforms separate.

However, it didn’t take long for them to give in to temptation and connected the two, thus sharing users’ data from one platform to another. Needless to say, your data is going to be much safer if you avoid both altogether.

What Are Unencrypted Backups?

This is something that WhatsApp was guilty of, which is why we recommend not using them at all if you care about the privacy of your online activity. While backups may sound helpful – and can be – if you want to recover old, deleted messages, WhatsApp made a fatal flaw in this feature.

Because they didn’t encrypt their users’ backup messages, this meant that they were vulnerable to being stolen. Opt for a messaging app that encrypts your backups, or doesn’t allow backup at all – it’s in your best interests.

It’s clear that there are more than a few reasons to boycott apps like WhatsApp and Facebook completely and turn over a new leave with something completely different. At the end of the day, if a company gets bought out by Facebook, it’s only a matter of time before it morphs into a slightly less sinister version – but still sinister, nonetheless.

Check out our list of the top five WhatsApp alternatives that are going to respect your privacy, and feel safer when you’re messaging friends and family on your smartphone, or through your desktop.

2 thoughts on “Top 5 WhatsApp Alternatives That Respect Your Privacy”