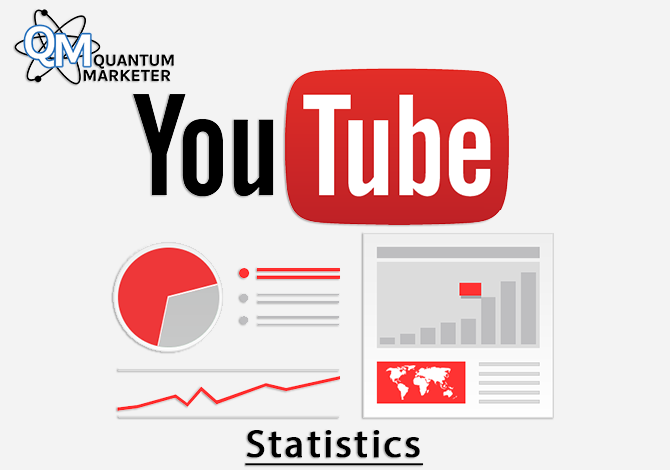 2021 was a pretty impressive year for YouTube, as people turned out in droves to create videos in all different genres.

The YouTube statistics for 2022 that we are going to talk about below showcase how people are using the popular video sharing platform right now and will give you an insight into what marketers need to know to connect with their target audience effectively.

This is almost twice as much as 3rd place, which is unscramble 40%. Needless to say, YouTube is the most popular online platform in the states.

What is really interesting about this statistic is that it shows a very different pattern to other social platforms, where use usually drops off sharply in the older age groups.

80% of parents in America that have children under the age of 11 years old say that their kids watch YouTube.

53% of these parents say that their children watch videos on YouTube at least once a day.

This is another interesting statistic, and is different other social networks, where the minimum age of use is 13.

OTT means ‘over the top’, and it talks about streaming services that are watched on TV. 94.5% of Americans who watch videos that they stream on their television are watching YouTube.

This means that You Tube is the most popular video platform in America. Netflix takes up second place at 74%.

We already know how popular YouTube is in America. However, what’s interesting is that only a fraction of all traffic around the world that goes to YouTube comes from the states. 16.4%, to be exact.

It is the largest source for YouTube traffic, but it still doesn’t make up the majority.

7. Majority of YouTubers are Male

56% of YouTubers are male, while 44% are female. While there are still plenty of women on YouTube watching and creating content, they don’t make up the majority.

The first? Google, of course.

9. It is the Second-Most Used Social Site

10. People Watch Over a Billion Hours Every Day

People on YouTube watch more than a billion hours of video every day around the world. This is a huge amount of content being consumed every day.

YouTubers that are over the age of 18 spend 41.9 minutes on YouTube every day. This includes all devices that YouTube can be watched on, from desktop and laptop, to TV and mobile.

40.9% of YouTube’s watch time occurs on mobile. What’s interesting is that more people have been spending their watch time with their TV, so this number has been shrinking.

However, this is still a huge amount of watch time being dedicated to mobile.

13. 8 Pages a Day Are Consumed by the Average YouTuber

The majority of people are looking at an average of 8.89 pages on YouTube a day, which of course increases the overall viewing time, and the amount of content that is being consumed.

14. A Huge Amount of BLM Content Was Viewed in June

In the first 10 days of June, BLM videos were consumed four times more than any other time of the year.

A huge number of videos with the word ‘beginner’ in the title were viewed in March and July of 2020, and around the world, videos within this category comprised more than 9 billion views.

A lot of people were teaching themselves how to do something, and a lot of people picked up a new hobby as the world faced lockdown.

Minecraft was the most watched game with a whopping 201 billion views.

72% of people using YouTube in March used it to get fit and exercise at home.

Videos that had the phrase ‘home office’ in the title increased 210% in popularity in March 2020, and daily uploads of the same content increased 700%.

Or 45%, to be exact, according to YouTube statistics. This was just in the first six months of 2020. This is not surprising considering most of life was cancelled for the year.

50.9% of B2B decision makers relied on YouTube to look up information about purchases. This was ahead of even Facebook.

21. The Majority of Viewers Bought from a Brand After Hearing About it on YouTube

70% of viewers bought a product from a brand after hearing about it through a video on YouTube according to YouTube statistics.

YouTube ads that are targeting people with intent have 100% higher lift than those targeted by other things, such as demographics.

People watching YouTube ads also tend to watch the ads for longer than on other social media platforms.

The top YouTube ad in 2020 in America was Nike’s ‘Never Too Far Down’.

24. More Than 5 Billion Dollars in Revenue

In the states, YouTube will make more than 5.56 billion dollars in marketing revenue in 2021. This is more than a billion and a half more than what YouTube made from America in 2020.

The number of channels on YouTube making $10,000 USD a year is growing and grows by 50% year on year.

26. 62% of American You Tube Users Access It Every Day

Not only are people using YouTube to look at their favorite content, but they are doing so on a pretty regular basis.

62% of people in America who access YouTube, do so every day, and some of them even visit the video streaming platform more than one time a day.

92% of people in America that use YouTube claim to use the platform every week, and 98% say that they access it every month.

27. People Spend an Average of 19 Minutes a Day Using You Tube

YouTube statistics will tell you that the average person that jumps onto YouTube every day spends 19 minutes on it.

You might not think that this is a long time, but when you think that about this being the average, it is actually pretty significant.

There are so many other platforms out there vying for people’s attention, so the fact that the average user spends 90 minutes on the platform shows that YouTube is really popular.

28. 99% of People Who Use YouTube Also Use Other Social Media

This means that less than 1% of people who use YouTube that are between the ages of 16 and 64 just use YouTube, and nothing else.

YouTube statistics shed some serious light on just how many people have used YouTube in general that use the Internet or have used the Internet in their lifetime.

81% of people in the world that have used the Internet at all have used YouTube.

Of course, this means that basically everybody has checked out YouTube at some point or another.

Even if you aren’t someone who is creating regular content on the website, it is pretty worthwhile having a presence there, even in a small capacity.

The thing about YouTube is that it has constantly updated and improved its services, which is probably why it is still one of the most successful video streaming platforms to this day.

One of the biggest ways it has done this is by adapting for mobile, which is why 22% of people who access YouTube do so through their mobile phone.

YouTube is now optimized for mobile, so that you don’t necessarily always have to access your desktop in order to make the most of it.

31. People on Mobile Visit More Pages than People on Desktop

Speaking of YouTube being optimized for mobile, it is clear that their strategy has worked, and as a result, people that are accessing YouTube through their mobile visit twice as many pages on YouTube as people who are accessing the video streaming platform on desktop.

32. People Spend 24 Hours a Month on The YouTube Mobile App

Again, in case it wasn’t clear, you definitely need to optimize your YouTube growth and marketing strategy for mobile.

This is because the average YouTube user spends almost 24 hours a month on their mobile app according to YouTube statistics.

As we discuss a little bit further on, YouTube is really popular when it comes to a few industries, and one of these industries is music according to YouTube statistics.

Of course, the majority of you would have been able to see the writing on the wall when it comes to this, considering YouTube is such a visual, video-based platform.

So, if you are someone who is trying to make it in the music industry, then you definitely need to consider YouTube to get your name out there, and share your content with the world.

YouTube is an extremely popular video sharing platform that got its start over a decade ago.

Back in the day, people primarily used YouTube to upload funny home videos to share with friends and family, but these days, there is so much more to the video showing platform.

Many brands have capitalized on the accessibility that YouTube provides them when it comes to their target demographics, and as a result, YouTube has become a space for content creators to make money, and brands to interact with their audience.

As we briefly mentioned already, people used to use YouTube to upload and view entertaining, funny, and serious videos.

They spend time in the beginning building up their audience base, until they have enough subscribers and watch-time hours to be able to monetize their channel.

Once they can monetize their channel they are able to make money from their content through ads.

What Are YouTube’s Competitors?

As you might have been able to guess already, YouTube has a number of competitors in the industry, and what’s interesting about this is these are primarily in the music industry.

However, we have a funny feeling that YouTube doesn’t really have to worry about too many of them as far as how many monthly active users it attracts.

So, there you have it, what we believe to be the most enlightening YouTube statistics in the industry right now.

As you can see, a lot of them point to just how popular YouTube is right now, and we have no doubt that this is only going to increase in the future.

If you are serious about marketing your brand, or you want to become a YouTube influencer, there is definitely a space for you on the platform.