Why 2022 is the Year to #DeleteFacebook for Good 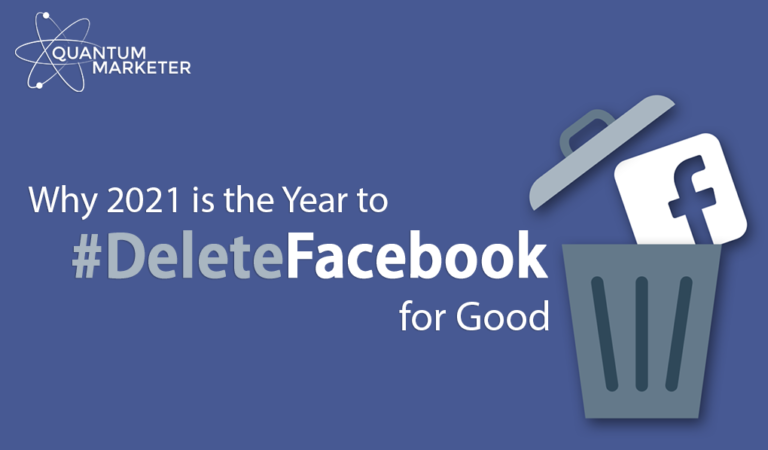 79
SHARES
ShareTweetWhatsappLinkedinRedditTelegram
Contents show
1) Had Enough of Facebook? You’re Not the Only One.
2) Facebook is Far From its Original Thought
3) It’s a Ruthless Landscape
4) The Zuckerberg
5) Even Celebrities Are Over It
6) Final Thoughts

Had Enough of Facebook? You’re Not the Only One.

When it comes to putting your pedal to the metal, however, it’s easier said than done. Facebook has been a great source of news over the past few years for most, as well as a great place to say hi to the older rellies every now and then without actually having to see them in real life.

However, we’re getting to a point now where the risks are starting to outweigh the benefits.

Remember those data privacy violations and the weird political ad policies that Facebook decided to stick to in the face of adversity? These things have left a bad taste in users’ mouths, and they’re not about to forgive and forget.

Let’s not forget here that all major tech companies are guilty of transgressions – however, Facebook just seems to make these types of mistakes over and over again, leading anyone to wonder if they really are remorseful, or they’re just sorry they got caught.

These days, Facebook seems to be known more for its problems than for what it can do for its users. Why? This isn’t the kind of social media company that’s violated its privacy laws once and became reformed as a result.

They keep doing it. In fact, Facebook has been guilty of some of these issues for the better part of the past decade. Let’s talk a little bit more about why Facebook should die.

What was Facebook originally supposed to be? Well, believe it or not, Facebook was initially called ‘FaceMash,’ where Ivy League mentionables were able to rate other users, based on physical attractiveness.

Yup, Zuckerberg’s first intention with Facebook was to find a way to rate other students, and therefore increase his popularity at college.

Shortly after, though, Zuckerberg came to his senses a little bit and decided to call it ‘Facebook’ instead. When those in the cheap seats caught onto it, Facebook took off as a way to get in touch with people that you had fallen out with.

It was pretty popular in the beginning, with growth that was, at the time, unprecedented: by the end of its first year, it had 1 million users, and these days, it’s got a cool 2 billion people around the world signed up.

As Facebook continued on into the next decade, it was quickly evident that being on social media was the way of the future – in fact if you weren’t on Facebook, you were considered the minority.

Log in to Facebook and scroll down a couple of times. What do you see? 50 ads? When was the last time that Facebook thought to give its format a spruce up, and get rid of the drab blue we see over and over again?

Not only do you get ads for things you’re never going to use in your feed, but they’re also bursting out of the sidebars too, waiting for their next poor unsuspecting victim. Even creating a post causes a headache.

Facebook presents way too many options, leaving its users overwhelmed. By the time you’ve finished writing your single sentence post, you feel as if you’re beginning a political campaign.

This is not to say that Facebook is a pretty sweet upgrade from the likes of MySpace, but it’s a little bit strange that a multi-billion dollar company hasn’t put any funds into making their layout more palatable and easier on the eye.

Now, we arrive at the real problem – the guy who began it all. If you really need convincing to #DeleteFacebook, all you have to do is look at the guy who was there from the beginning – the guy who opened Pandora’s box.

From building a wall around his house in a Hawaiian island to keep out the locals to saying that fake news influencing the 2016 election through Facebook is a load of bull, the guy is the gift that keeps on giving.

We all know that Zuckerberg later had to eat his words and admit that fake news not only existed on Facebook but was pretty bad all around for all intents and purposes. However, he was up to his usual tricks not long after when he botched the handling of Cambridge Analytica.

He hasn’t outright admitted to being completely involved in the data mining operation, but anyone who knows what an Ivy League college is can surely connect the dots.

The long and short of it is, you can’t trust Facebook. They’re a greedy, monopolizing corporation that cares more about making a profit from their users than protecting their privacy rights.

From leaking its user’s private information to selling said private information to third parties to help with their ad campaigns, there are now plenty of reasons to #DeleteFacebook. What you need to understand more than anything else about Facebook is that they have continued to put profits over the privacy of their users, something that is seriously concerning.

This is a huge compromise to make to keep in touch with that long lost great-aunt who can’t even work out how to send you an emoji.

With Facebook getting in the way of democratic elections, it feels as if this social media giant has gotten too big for its own good. The only way to make sure that they don’t take over completely is to boycott and cut them down to size.

Even Celebrities Are Over It

If you need even more of a reason to quit Facebook, let’s talk about the celebrities that have had enough of the social media sharing conglomerate.

Will Ferrell said that he is incredibly disturbed about the Cambridge Analytica scandal, and how it misused millions of people’s information on Facebook. Jim Carrey is also over it, saying that he is not only getting off Facebook but getting rid of his stocks in the company, too.

Elon Musk even came to the conclusion that Tesla and Space X doesn’t need their respective Facebook pages anymore.

So, there you have it – ample reasons to leave Facebook for good, and stop supporting an evil corporate giant that ended up like the rest of them. While Facebook may have initially had good – if slightly shallow – intentions, it quickly outgrew itself and became a data mining monster.

If you care about the privacy of your information and identity online, you should #DeleteFacebook forever. Don’t give powerful monopolies like Facebook power over your basic human rights – there’s no need to be a social media slave in the name of corporate greed.

While great-aunt Betty might be gutted, she’s better off going back to her knitting and black and white TV. If something is too good to be true, it probably is.