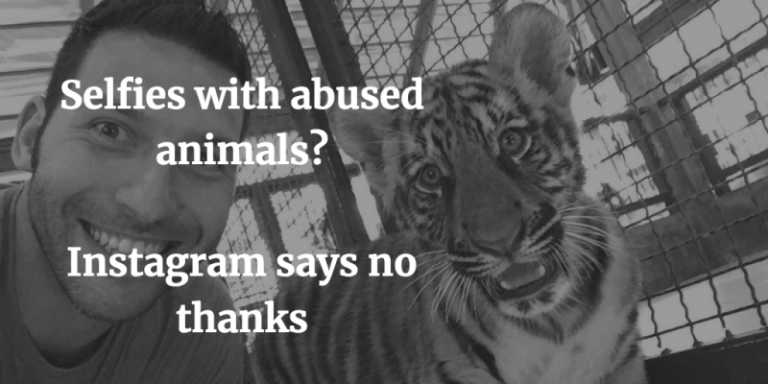 As someone who lives in Thailand I am regularly frustrated by tourists posing with drugged tigers and riding on elephants – so I welcome the following feature with open arms.

Only a few days ago I wrote about some pretty cool upcoming Instagram features. And now, just a few days later, Instagram is being praised for another strategic move that is bound to win brownie points worldwide – but not in the way you might think.

Along with being one of the most engaged sites in the world, Instagram is known for its ability to keep up with the crowd and continuously bring out updated tools and applications. Now it’s being recognized for something entirely different – protection of animals.

The explosion of the selfie in recent years has seen people place themselves in all kinds of precarious positions for the perfect Instagram post. Most of the time the most these mishaps get is a viral share with some laughing emojis, but now and then there is a darker side to it as well.

When traveling, a lot of us look forward to the thought of experiencing the local culture and natural wildlife.

Usually, this includes animals – elephants & tigers in Thailand & Vietnam, monkeys in India and koalas in Australia.

Selfies with animals is a seemingly innocent thing to do to when trying to build your influence & become famous on Instagram when coming across those exotic species, perhaps you even do it for your travel blog.

However, it’s anything but.

Taking selfies with animals and posting these pictures on Instagram can encourage their exploitation and abuse. Vulnerable, defenseless mammals like sloths and koalas don’t like being handled too much and risk becoming distressed in situations that are out of their control.

Beyond making these animals feel uncomfortable, the demand for selfies with local wildlife also fuels a much bigger operation. Many of these animals are taken from their natural habitats and traded for the benefit of the tourism industry. This is what you are supporting when taking that apparently harmless selfie.

Instagram has said that they will hide posts that involve people taking selfies with animals that allegedly indicate exploitation, and otherwise actively encourage people not to take or post them in the first place.

If you do publish something along these lines, Instagram will present you with a warning about the dangers these animals face through this kind of tourist activity.

Instagram is specifically targeting any hashtags that relate to abused animals or selfies with animals. Hashtags like #koalaselfie or #tigerselfie will elicit a warning that states, “animal abuse and the endangerment of animals are not allowed on Instagram.”

Instagram has been explicit in its approach that, in encouraging a flourishing online community through its social networking site, it parallels this with strict rules around content published.

Thankfully this now extends to the plight of vulnerable animals, giving them a voice and warning people the dangers that they potentially face with the taking and posting of seemingly harmless selfies. Instagram wants to uphold a safe and inclusive community that strives to do good to all that are involved, whether that is through the virtual world or in the real world.