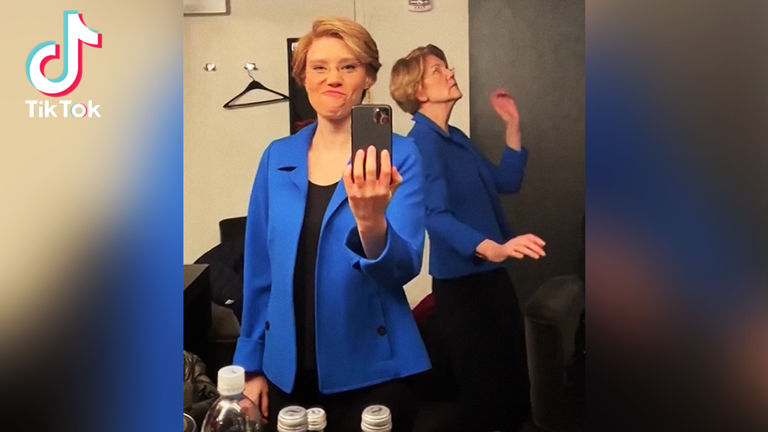 It wasn’t that long ago that everyone, when thinking about TikTok, saw it as a fun, harmless way to share video content with friends, family, and fans. However, Elizabeth Warren has now changed all that.

With the flick of a switch, a new video from Saturday Night Live starring Elizabeth Warren has taken TikTok from being a place to have a bit of fund, to inevitably bringing in similar, more serious conversations that we’re having on other social media sites.

This all happened almost instantly when SNL posted a video on their TikTok page of Kate McKinnon and Elizabeth Warren, who has just dropped out of the presidential race, swapping places in the mirror of a bathroom as Drake’s music plays overhead.

Naturally, the clip has gone viral, racking up as many as 500 million views since it first was uploaded. It is accompanied by the hashtag #fliptheswitch.

So, while TikTok has been nothing by silliness since it first launched a year or so ago, it seems that politics are again getting in the way of a good thing, and transforming a platform to be something entirely different to what it was intended to be.

It’s no secret that TikTok isn’t anyone’s first choice for political discourse. However, if the response to Warren’s SNL video is anything to go by, this could be changing, and quickly. In fact, it’s attracted more comments and sparked more conversations than anything that SNL has uploaded onto its TikTok page so far, which is pretty telling.

This could mean that TikTok is about to undergo a serious structural change that could change the way we interact with people, upload content, and comment on videos. Whether this is a good or bad thing is up to the user, but it’s hardly surprising that Tiktok has met a similar fate as other social media platforms.