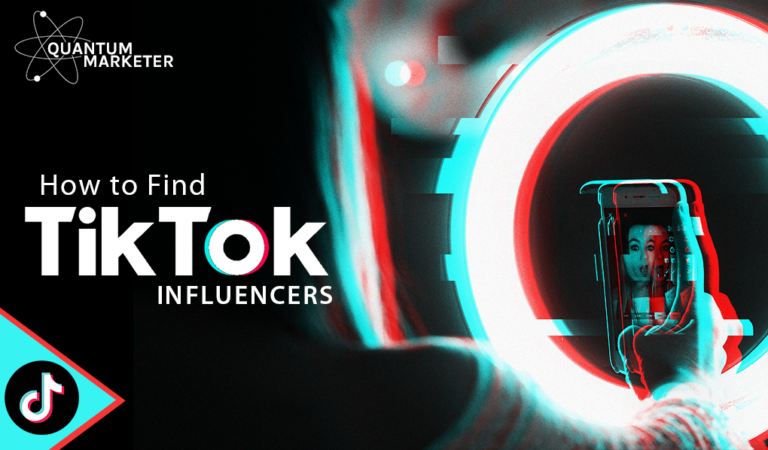 TikTok is fast becoming the social media platform of choice for teens everywhere, and it’s starting to prove more popular than even Instagram. On TikTok, you can create short videos to share with your family and friends, and they can be as short as 15 seconds, and as long as 60.

Generation Z doesn’t want to do anything but TikTok, which is why it’s a great place to have a presence if you’re an aspiring influencer. TikTok’s influencers are far greater than any other influencer we have seen so far. However, this begs the question: how do you find TikTok influencers?

Let’s take a look at some of the methods that you can use to find TikTok influencers.

Platforms That Cater to TikTok Influencers

There are many third-party companies out there that cater to TikTok influencers, and while you do have to pay to use their platform, we think that most of them are great value for money.

They can also provide you with insights and analytics surrounding your niche and industry, to help you grow your TikTok even further.

Agencies That Cater to TikTok Influencers

You may also want to pay an agency who can help organize influencer marketing on your behalf. While there aren’t as many agencies that cater to TikTok right now compared to other platforms, this number is growing.

The best part is that most of the time, you can leave the search for influencers up to the agency, which gives you a great chance of finding the best options for your niche.

How Does TikTok Compare?

So, how does TikTok compare to other platforms out there, then? Well, the monthly downloads of the app are now greater than YouTube, Snapchat, Facebook, and Instagram. This means that there are more TikTok users than there are Snapchat users, and it’s quickly becoming one of the biggest social media sharing platforms out there, period.

You may notice that the kind of content you can find on TikTok is different from other platforms out there. This is because of the way that TikTok sets up its system, as well as the people who use it.

People using TikTok generally go for shorter videos, as opposed to text posts and static images. TikTok users also don’t like to put captions on their content, and while you can put hashtags on your TikTok content, not everyone is doing so.

TikTok users do use filters on their content, just like people who use Instagram do. However, we think that TikTok is slightly more interactive, as you are much more likely to get an insight into the lives of the people that you’re following.

Live streaming is another mode of TikTok that has proven to be incredibly popular. Perhaps the only thing that TikTok doesn’t have is content that caters to gamers, who are over on Twitch.

Your Influencer Marketing Campaign on TikTok

While TikTok recently started an advertising platform, it’s still far more common for people to use influencer marketing as their number one way of promoting themselves or their brand. This is where brands partner with TikTok users to create content and share it with the audience.

If you are a brand with a product, then influencer marketing is going to be a great tool for you to make the most of. Of course, the partnership that you set up with an influencer has to come across as genuine, and you have to really believe in the company or influencer that you’re teaming up with. Generation Z is pretty savvy and can tell when something isn’t authentic.

This is why it’s important to get a really good grasp of the platform itself before you dive into influencer marketing. TikTok isn’t like other social media platforms, so what worked for you over on Facebook isn’t necessarily going to work here.

If you think that TikTok is going to be a great way to reach your target audience, then you need to find the best influencers for your niche. A great place to start is to search for influencers based on your recommendations, which will be closely related to your niche.

You also need to have a good grasp on what it is that your audience likes to see from you. Once you’ve gotten to a point where you feel like you know the platform inside and out, then you’ll need to consider the posting habits of each influencer.

You need to know them as well as your own content so that you can prepare for what a collaboration might look like in the future. One of the things that we recommend you look at is their engagement metrics.

You need to make sure that their audience is just as engaged as their follower count claims. You don’t want to team up with someone who doesn’t get that much engagement despite the number of TikTok followers they have.

There are three different ways to find TikTok influencers. You can either do the research yourself, pay for someone to do the research for you, or work with an agency, and go with their recommended method of finding the right fit.

Search on Google for TikTok Influencers

One of the best places to start when trying to find the right influencers for your TikTok account is Google. Remember, though, that there isn’t really a link between influencers who appear at the top of Google and those that are going to help you become even more successful.

You will need to dig a bit deeper and take a look at their content, and how much engagement it’s getting. Try searching for things like ‘top TikTok creator’ as well as the name of your niche.

If you’re on other social media platforms like Instagram, for example, then you may want to see which influencers are also on there as well. It could be worthwhile teaming up with something which ticks all the boxes not only through TikTok but on Instagram as well. You can even see whether you have an existing relationship with any of the influencers you’re looking up or not.

So, who are the top 10 TikTok influencers currently taking over this popular social media sharing platform, then? Let’s meet them.

Loren Gray is easily the biggest TikTok influencer to date, with a whopping 35 million followers. She is always posting videos of herself lip-syncing to the latest pop songs, and her creativity in her videos has led to her being nominated for a Teen Choice Award, as well as a record deal with Virgin Records.

Baby Ariel is coming in at a close second with over 29 million TikTok followers. She creates similar content, and as a result, has won a Teen Choice Award. When she’s not uploading videos to TikTok, she’s doing a bit of acting and has even been on the Disney Channel as well as Nickelodeon.

This teen is easily one of the most-followed people on TikTok, with an eye-watering 21 million followers. He creates a lot of lip-syncing videos, and he has since released four Eps. He began acting in musicals when he was just 7, and it’s only gotten better from there.

Cash Baker is only 16, but he’s already made a huge impact in the social media world, as well as the music world as well. He currently has 13 million subscribers on TikTok and loves putting up lip-syncing videos with his siblings. He collaborates a lot with his brother, Maverick.

Kristen Hancher is known mostly for her hairstyles because they are always changing. She currently has 23 million TikTok followers, and the majority of her videos include her lip-syncing. Born in Canada, she has earned a Teen Choice Award and also has a large following on YouTube, as well as Instagram.

Lauren Godwin’s stand out blue hair matches her outgoing personality well. She loves making comedy and pranks videos, and she often collaborates with her boyfriend, Sebastian Bails. She currently has 17 million followers and has teamed up with many different brands and companies.

Gil Croes is one half of The Croes Brothers, and while he started out as a model, music soon took over. He also loves making comedy sketches as well for his 22 million TikTok followers. His brother has 18 million followers.

These brothers are a little bit closer than the other siblings we have on this list because they are twins. They have 18 million TikTok followers together, and they also have a big YouTube following as well. They love making prank and comedy videos.

Savannah LaBrant is one of the very famous LaBrant families that can be found on Instagram, Facebook, Twitter, and of course, YouTube. She has 15 million TikTok followers and loves making videos that include her husband and daughters.

It wasn’t that long ago that Jason was a barista at Starbucks. These days, though, he’s a TikTok sensation with 12 million followers. He and his wife and children often upload challenges, comedy skits, and videos of them playing games together.

As you can see, influencer marketing has left quite an impression on people these past few years, and it’s showing no signs of slowing down. It’s definitely one of the most effective ways to get your brand out there online, and with a brand new sharing app like TikTok, there’s no better way.

However, finding the right influencer to suit your brand and niche can be easier said than done. Try applying our practical tips and tricks for finding the best influencers for your niche, and discover the power of influencer marketing on a brand new platform where it’s already been proven to be effective.